Pelle Grandpa and the Pirates 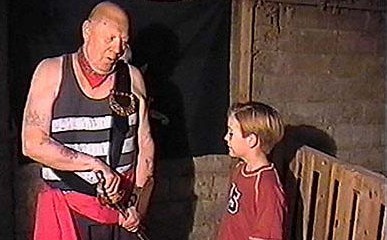 The summer of 2001 Andreas wrote a very, very short story about a little lad who believes his grandpa is a retired pirate. Soon the boy, Pelle, is kidnapped by a couple of buccaneers, and grandpa, who actually is a retired pirate, dusts off his cutlass and comes to the rescue. The intention was to make a simple little film that was shot in one day. But as projects tend to do sometimes, this one grew into something more substantial. And to no great sorrow. ”Pelle, Grandpa and the Pirates” was for the greater part a very pleasant thing to do. Posted here is the octopus-attack-on sub-sequence.