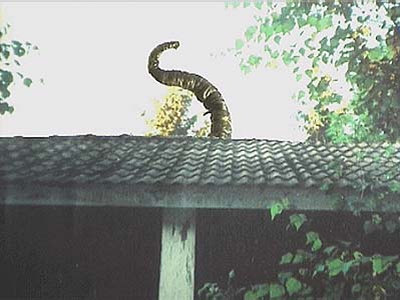 Schröder in the film. The background is a photo blow-up. From whence cometh then the dreadful names Schröder and Pitt-Krüger? When we dreamed up the story very, very late an evening, the German cop show ”Captain Rex” was shown on the TV. In the drama appeared a villain named Pitt-Krüger, and we laughed hysterically. A while later appeared the dog Schröder, and we laughed even more. Remember; this was during the hour of the wolf, when the brain turns into a goo of illogicisms. (”Pitt” is Swedish for ”dick”, giggle, giggle.)