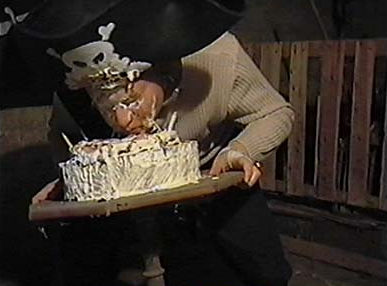 The beginning of the end. Grandpa disarms Sharkseye, but is feinted by the pirat who attempts to get away. His escape turns into a destructive slapstick cavalcade in the best Buster Keaton fashion. At one point he falls face down into a birthday cake. The cake was a foam rubber construction over wich we sprayed whipped cream. If someone wonders about Sharkseye´s king size hat, it´s made out of a foam camping matress. During the whole film, Sharkseye´s left hand is wrapped in gauze. This is because Andreas stuck his hand into a broken glass jar during his first day as Sharkseye. After the cut had healed, we still had to keep the bandage throughout the film, of course.