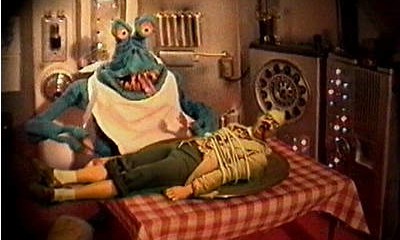 This was a fun project to be involved in. Musical producer Johan Halleršd had together with comedian Fredde Granberg written the fun-goofy disco tune ”Scary UFO” and felt the urge to make a video. UFO and space surroundings were built by Micke Riesebeck and I toiled with the villain of the piece; the man-eating alien Mr Alien (for simplicity«s sake). Sundry friends of Johan appeared as actors, chorus girls, etc. We wanted a celebrity to appear and contacted acclaimed actor Sven Wollter (king Hrothgar in ”The Thirteenth Warrior”), since Mr Alien had impersonated him in the lyrics. Mr Wollter turned us down, but the loved comedian Hasse Alfredsson -a prankster down to his very soul- jumped in as a crazy doctor (an extention of one of his old stints). All stunning composites in the following pictures were made by Johan.