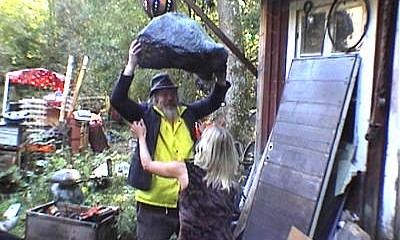 How I had yearned to make a dino-flick! This one turned out so-so, because my animation didn´t reach the high standard I strived to achieve, the children spoke their lines very quietly and the weather was at one occation freezingly cold, wich made the shooting rather dreadful. But it´s quite fun and does have its moments. The plot is simple; three kids meddle with a time machine and are propelled back to the primeveal ages, where they are chased by a carnivorous dino -but saved by a cave woman. Simultaniously, two dim-witted villains skulk about at the place of the machine´s intventor, attempting to steal the little wonder. At the last moment the kids are snatched from the jaws of death and brought back to present tim in the company of the cave woman. She beats up the bad guys and they are picked up by the cops.