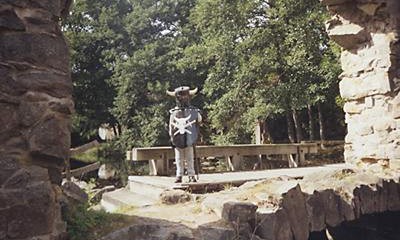 About the same time we tinkered with ”Eye of Evil” we began the project ”Crossed Blades”. We were still shooting with an analog camera and tried to do as many locations we could in a single day. ”Crossed Blades” was a children´s film with children in almost all of the roles. The plot was simple enough; nice knight tries to save lady from bad knight, with various misadventures in between and a slight twist at the end. We shot two major scenes in one day – the end fight between the two knights and a brawl between the hero and an ogre. We were filming during the very late summer and then two things happened; the weather changed and the hero´s recreational pursuit, sports, got the upper hand. The following year all participants had grown too much for us to be able to match the old footage with new. We felt dispassionate about having to reshoot; the footage we got had turned out really well. Consequently the project was never finished, but we mention it like this since so much work went into it.