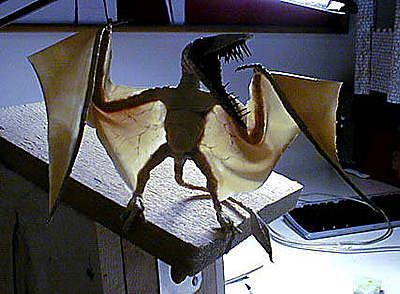 When the latex had dried I rolled out a large piece of plastillina clay, smoothed it out as much as I could, and simply pressed one of the arms, plus the side of the body it was attached to, half way down into the clay. When aligned properly, making sure that there were no stress coming from underneath the puppet, pressing it upwards, I drew the desired outer shape of the wing in the clay with a pencil. The drawn lines reached from the tip of every finger down to the hip. Latex was then puddled on quite thick within the areas of these drawn shapes, and allowed to dry. The puppet was then pulled out and turned around to repeat the process on the other arm. The seam between arm and wing membrane can then be smoothed out with liquid latex.
I´ve also used water-based clay, the white kind you usually buy in hobby stores, used to make objects that will air-dry. And I´ve also lowered latex-covered wing-bone-structures half-way into plaster, just as it´s starting to set. This is a little more tricky, but works better if you succeed. Something in the plastillina clay makes the latex skin curl up when you pull it loose. You have to make the skin quite thick to avoid this. You´ll have no such problems detaching the latex from plaster.These wing membranes were made with the plaster method.
The veins were made by dipping a large needle (wich you can see in one of the pictures) in latex and simply ”tatooing” the veins on the wing membranes. So, you simply dot with the needle to move around the liquid latex to form the shape of the ”lightning bolt” veins.